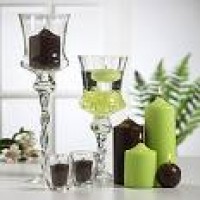 A candle is a solid block of wax with an embedded wick that is lit to provide light and sometimes heat.

The heat of the match used to light the candle melts and vaporizes a small amount of fuel. Once vaporized, the fuel combines with oxygen in the atmosphere to form a flame. This flame provides sufficient heat to keep the candle burning via a self-sustaining chain of events: the heat of the flame melts the top of the mass of solid fuel, the liquefied fuel then moves upward through the wick via capillary action, and the liquefied fuel is then vaporized to burn within the candle’s flame. 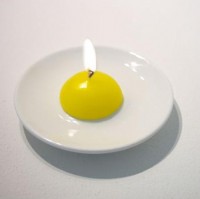 Candles have been used for thousands of years and up until the early 1900, they were the single source for artificial light. Candles also have a rich tradition in religious services in many faiths through-out history. Today, the candle is no longer the single source of light but is used abundantly in religious services as well as in birthday celebrations, holidays, and home decorations.

The now so prevalent aromatherapy candles emit scents that have the power to enhance your mood that lift your spirits and heal your tensions and the more recent- the decorational ones brighten up the space with its vivid shapes and colors.

Ever tried to light up the Candle a little tilted? Try it..

After the initial few melt drops, it adjusts itself. It burning side becomes parallel to the ground and the tilt elevation ceases to matter for it. The candle does that within a few seconds of lighting it up. How marvelously it makes use of that burning tip.

It knows that the wick would be on fire anyways; better to adjust the upper surface and let the wastage of wax be prevented; prolonging the candle life in the process.

That’s exactly what I am trying to do. My situations have not been very favorable to me; I also wish to balance myself so well in that tilted altitude that no matter what, I shine and am able to light up my surrounding space. I also wish to learn how to make use of the situation in the most exploitive way that I am able last longer.

Like we hold the candle close if want to see something hard; I too wish to become a source of light- A Candle.

Even though it gets used up; some of it that remain would be thrown away anyways, it manages to light up the space for the whole duration that it lasts. One single small candle is what we get suddenly dependent on when the Electricity cuts off. I am talking of the people who don’t own an inverter like me :(. My maid was surprised to see that I light up the entire space with multiple candles.  She can barely afford a tiny flick resembling more like a matchstick’s distant cousin. What I mean to say is that perhaps she could explain the magnitude of a humble Candle’s being better than me.

Wax being wax, it softens at a very high temperature; too cold temperature would make fissures in it and break it. The older it gets, the dirtier it becomes since it keeps depositing the dust from around. The color pales off and fragrance may also wear off. Be as it may, you pick one and light it up, it would brave itself against the physical state of its being and continue to burn till it can; despite its fragility..

Anytime you hold a candle, despite its date of packaging, manufacture or its storage condition, it would leave some wax on your fingers too. That distinct sticky waxy feeling would transfer itself on your fingertips the moment you pick one.

Now, don’t take that Candle to be a stupor. It teases the plasma on its wick and tames it down to be limited. It doesn’t let the flame dance and spread itself taking over everything around. Instead, the fire too goes off when the wax melts down!

The Candle very cleverly uses its wick to control the fire and complete its lifecycle; spreading light around. If at all, it makes use of that flame and before there are too many wax drops, balances itself against any tilted surface.

I too wish to use my wit to tame my conditions and complete my lifecycle; spreading the wealth of knowledge around. If at all, I would use my situation as an example for others and retrospect my deeds that would clearly outshine my losses and guide me through my future steps.

Corporate worker, textile designer, writer.
View all posts by Olivia →
This entry was posted in My mind and tagged Ambition, Candle, Fighting Back, My Experiences, Thoughts, Visions. Bookmark the permalink.