Made for Each Other

Disclaimer: Read below a post as was narrated by Sneh Bodh, my friend who I had met when I had worked with Baxy in the year- 2006. She had come over to my home last weekend and had wanted this to be posted across- (with pleasure). Sequences included here are exactly how was told and had been subjected to no edition. The draft of the same has been approved by herself and here, I have produced the same with her pictures, for which also a permission has been sought.

Sneh Bodh comes from Himachal Pradesh– the land of Apple Orchards and Beautiful Women (if I may add that). I have envied her dark black tresses that shine and sit straight behaving well on her shoulders. She passed her senior secondary from Delhi and had been in DAV, Kullu in HP. She was the School Captain (wow) and Rahul was the School Headboy (great).. Wait, but who is Rahul?? Read on-

So, she had a huge crush on the School Bead boy; so far so good. In extra- curricular events and school meet activities, they were the ones running around to organize the functions- isn’t that even better? But then, she being a coy one had kept her feelings confined to herself. As her fate would have it, she came bag and baggage to Delhi to complete her Sr. Secondary. Now, that was certainly not happening.

Rahul was out of sight, but not out of mind- not yet. She would often muse how he may be doing or if he would ever even think of her- and why would he- if at all??

Years went by and she happened to attend one of those huge festivals that are an integral part of Himachal’s culture. People of Himachal Pradesh celebrate and participate in all their local festivals and fair with great enthusiasm. Most of the fairs and festivals are connected with the various seasonal changes. There are even folklores connected with the beginning of each festival. These fairs offer a clear glimpse into the lives, the beliefs and the popular customs of the rural life of the state. Each district has its own sequence of annual fairs which are connected with the historical and sociological background of that area. On the festival day the farmers do not work in the fields and rich and poor alike celebrate these to the best of their financial abilities. The tribal festivals have their own identity which is totally different from the festival celebration elsewhere.

While the Himachal valleys bathe in joy of that fest, they happened to meet again (boy!!). They had grown up now and were a little hesitant too- so was the feeling (for each other) mutual? They had exchanged their landline numbers (base telephone); making each other promise not to call but yet stay in touch (like how?) Letters definitely started happening. They talked about everything under the sun except for expressing their feeling for each other (sigh). And then, a day came when that halted too. Sneh had not wanted to answer or write any more of those casual “how are you” stuff. Rahul wrote a few and receiving no replies from her, stopped scribbling any himself. The humble letters were not happening anymore.. 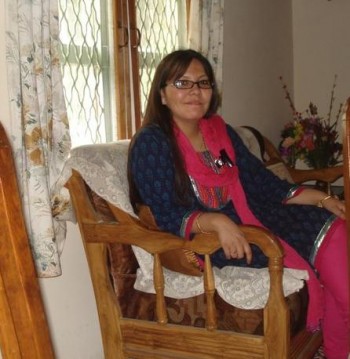 Back here, Sneh (as I call her) had grown up into an independent, confident and a beautiful woman. I had met her when we worked in Baxy in June- 2006. Just after she had left Baxy and I too soon thereafter, something just happened that changed her life forever; infact one that had changed her love-life too.

While Orkut was the “IN” SNS then, her brother one day asked Sneh to browse through some of her old school friends. Both siblings had studied in the same school back in HP. Her brother being the protective elder one (name with- held on request), knew most of her friends. As suggested by him, she did check out the names that her brother had asked her to.. Rahul’s name was one of them!! Except for he didn’t look like him. He had grown up and looked very different from what Sneh remembered of him. After all these years, the boyish charm had gone- instead a grown up maturity had made a firm place. She had sat there in front of her computer ogling at his picture for sometime. Was that really him; yes he was Rahul. He did bear some resemblance. Alright then, after loads of inhibition, she scraped “Hi”. He replied. And then she lied; she said she didn’t own a cell- Blatant Lie.

Oh, it was going no where and so she decided to play it “safe”. She had again lied saying that she was “happily” married..!! That was in the reply to the 1st question Rahul had popped up. Wasn’t Sneh getting any message, was she scared, apprehensive or just was shying away from the reality? She had grown up- the initial hesitance had now been re-placed by shyness. It was too complicated and whatever was left of it, was further skewed up by the twisting of the facts by Sneh about herself. I marvel at a woman’s ability to become a girl at the drop of a hat. Oh so coy and innocent..!!

The common friend Savita, could take no more of this Hide and Seek. Sneh had given stories about how she was seeking a work opportunity in Chennai. Poor guy, he worked in India Bulls in Hyderabad and after considering and discussing with Sneh, he had quitted his then current job. He had decided to shift base to Delhi. His flight was to land exactly when Sneh’s was to take off for Chennai (!) Emails were all that were happening, she still didn’t own a cell; how she could have, the cell number would have given her location out even before he would have answered her call. After her friend’s stern warning, she had disclosed about her “marital” status.

Atta girl, now been cornered by Savita somehow apprehensively now decided to meet Rahul at Dilli Haat. (Where was I that evening..??)

This was not as simple as it sounds- why? She and her friend induced her brother to believe that they were to attend a wedding. He being a caring brother (that he is), offered her to take his vehicle instead of Maruti (for safety reasons) and had let her go.. The two dames dressed up in traditional do, complete with all the accessories- had merry well started to reach- where they had told Rahul to wait for them.

Wait- till you read this. The girls had worn their “traditional attire” up on their Top and Jeans underneath.. @!#@#$

Savita had jumped up and hugged him since they were meeting after years. Wasn’t that an obvious reaction? Sneh and Rahul had stayed and acted as if they were strangers introduced just then. Savita was barely able to take that strange cold reaction. They moved around Dilli Haat, had lazed around at India Gate, went to Sikkim House for dinner and had changed back there itself. What an arrangement- and worth every penny. At their way back home, they had dropped Rahul too and then..

They had become a couple and a married one at that. They stay in South Delhi. Rahul worked with Barkley’s (Banking sector), when he had shifted base to Delhi, now with HR Craft, and Sneh drives to Gurgaon for her work. She works as an HR Manager. A husband has to be highly liberal, and open – minded to let his wife pursue her career, interest or whatever. I haven’t yet met him, but already have high thoughts about him from whatever Sneh has told me and I have understood. I have always admired the “man” who “fights” and “wins” back his woman over. The fact itself is a major turn on..

Sneh and Rahul got locked up in their wedding lock on 17th June, 2009. Both of them have had their share of understanding each other. They had often wondered about if what they did was to be at all? They have done the right thing; and so feel both of them.

Why had they kept meeting each other if that was not for oh so sweet relationship- what better than getting married to your childhood crush and someone who is so dedicated? I have only heard what Sneh has narrated to me yet; however, can still vouch for her husband’s commitment. He was much committed and dedicated to her even before he had met Sneh at Dilli Haat. Much before than they had met on Orkut, and even before they had exchanged phone numbers in Kullu fest. They were meant to be and all forces worked to re- unite them- once for all and for all times to come.

I would love to post yet another one on this whenever I meet both of them at their place.

Sneh, I wish you a very happy Married Life

Rahul, this post is what Sneh had wanted to “gift” that someone she loves.. YOU..!!

5 Responses to Made for Each Other