I want to Break Free

I had turned into a recluse- Blogging has pushed me back to Life. I don’t vent, I communicate. Beyond words, relationships and limitations, i.e., It’s my mind talking out loud in open. Let everyone comment. The good ones make me feel better. The nasty ones (not many really) make me tougher. Adding to my endurance, tolerance and my ability to answer back.

Even while typing this one out, I am constantly answering my mails and chats. Fellow Bloggers, New Joinees, Queries.. I wonder; if I ever be able to achieve a state of solidarity- chances are slim. Maybe my Computer does read my mind. It doesn’t let me stay confined. It seems strange now; how I had closed myself for the last 3 years… I have blog friends beside my other friends (from my childhood, school) connected with me. I have been sailing through extremes, either a crowd; or just me.

It’s 7.30 in the morning. Pretty unusual for me to be tapping keys and making posts!! I have had troubled times and yet, have slept snoring (I do like a cat- mom would say, a light sound expressing content). Last night, I couldn’t.

I am fighting back my tears. Failing as I had late last night. And the night previous. Had I seen it coming? Yes, I had. And the confusion? Yes, that included. What am I thinking? Or wanting to..?

I am a die- hard optimist. Almost pushing things, when they look impossible to be achieved the most. I am at a point again where I am pondering upon why things keep circling around? Is it that they test my ability to keep myself detached… or is it because they want to get attached?

The two cyclical conclusions that I reached

After a series of ugly chain events, i.e., after breaking away from my dead marriage; I had as if stepped into a live arena. Instead of sorting things out and breathing, I had landed myself into yet another tricky space. As I write this here, I look back and realize, not even a single time it has been hassle- free. Never.

It’s a package deal- I guess.

If that’s been the trend, then why fussing over now? I have been a caring one, and yet indifferent- often rude. No it’s definitely not Love- certainly not. Or is it?

Apparently, I take things as they come- yet, it’s been very long that I have used my mind so much- thinking about a possibility that could be or .. At this point in time, I am wanting to break a pattern. A strange pattern that I have been forced to live even though that I had not wanted to step into. Is it asking me to stop? Or rush?

Let’s put it this way: I stay in a golden (and not gold) cage, completely secluded. Stranded. Almost suspended. I wish to fly out. Flap my wings, ruffle my feathers, flutter around, look for a mate.. Yeah that too! Pigeons are blessed. They get into a relationship, make eggs and fly away only to look for another mate yet again, the next breeding season. 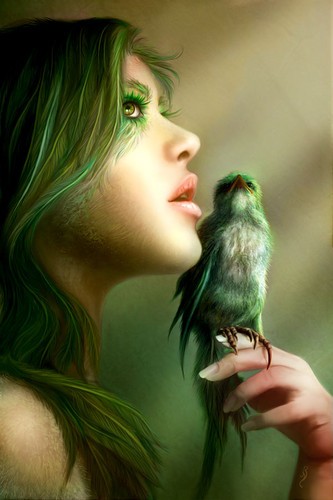 No hard feelings, no attachments, no “you broke my heart by saying this”, absolutely no expectations, no taking for granted. They are birds in the very essence of the definition. They fly and fly away. Wonder, why don’t confusions creep in when they have multiple relationships in their life- time? Because they follow rules. Giving 100% to the current one- till it lasts.

Maybe, that’s the primary reasons of I closing in. To avoid confusions as far as possible. I believe, it’s too much to pay in return. It costs the relationship eventually. You either fight it-out right- staying indifferent or else just don’t step in.

I know how to fly away– I only wish to fly now.

Corporate worker, textile designer, writer.
View all posts by Olivia →
This entry was posted in My Biopic Log, My Grievances, My mind and tagged Blogging, Culture, Fighting Back, Life, Lifestyle, Loss, Love, Marriage, My Experiences, My Life, My Thoughts, People, Relationships, Thoughts, Women. Bookmark the permalink.

13 Responses to I want to Break Free