Buttoning up the bygone memories

Today I had sat & sorted the Button Box.

I have been seeing this assortment mix since I was a toddler. I loved playing with so many of those small, colorful, plastic tuckables. Of course it was highly forbidden! Although I was responsible to find the exact match of the sample from that lot. Every 6 months I would sort them, clean them and place them back in a cleaner box. I have been doing this since I was maybe 6 or 7 years of age!

I am sure they are happy to be out of that box, washed and dried!

Tomorrow I will bead the same types in a thread and put them back in a box in a more arranged pattern. Like me, they too have laid closed hidden somewhere there but not really knowing where.

After I lost mom when I was 17, I only had as much time to pack up my dignity and leave my uncle’s place. Most of my stuff have remained inside their respective carton boxes ever since. I was hardly having any life much less to check the packed cartons. I only unpacked the ones those had my outfits or dishes. Although I had unpacked 2 of those big cartons last year, the Ariel detergent box that held all the buttons had remained un- sorted.

Up until now that is!

I sorted all the buttons how I used to for all those lost years. Memories had caught up on me completely off- guarded. The lipstick mom had picked up from her friend’s place, when she was young; reminded me how she never applied any! She was fascinated with how the color- stick went up and down and had stolen that one- only to have broken it and stay guilty for the rest of her life. The only few times she did carry some color on her pout was when I had insisted and almost been adamant about that.

Some things are just gone with my mom.

Those huge artistic buttons that were tucked on my Snowhite dresses. Ruby would know this. I was a matching freak even back in my teens. I would wear lemon yellow pumps with my chrome yellow- polka dotted peasant skirt and top!

Those red n yellow buttons were tucked to my red n yellow cardigan that wore when I was maybe 3! I had received my 1st National Level Award and in Painting Competition wearing that one. The yellow wool of that one and mom’s pink cardigan were later combined to knit a pullover that I now wear to save myself of the chilling winter winds. I have been wearing that one since I was 16!

The twitch buttons were toyed with every now n then. I only needed mom to look elsewhere and I would start twitching those. Those hooks of my school skirt, folds a story within themselves of what a rebel I used to be. Not that I am any better now. These metal spring buttons still looked as if were toyed with only yesterday. They were eager to jump within my thumb and index finger to get pressed with that small “click” sound.

Those are the keys of my mom’s sewing machine. I don’t have the machine anymore. I had given that away to my then current landlady in 1998. I had not known that apparently after 10 years from then, I may be in a position to use it. I had barely any place to stay under- how could I have carried the bigger things? It was an Usha model with an electric motor fitted beside the provisions of stitching with both hand and feet. I used to stitch with that one at times. Till she was alive, I wore home- stitched slacks. None of the tailors have been able to do it as perfectly as she used to. I don’t wear fitted slacks with my long tunic or kurta anymore. She would stitch blouses in no time for the Basant Panchmi day that our school is so famous for. That one day every year mostly in the month of January or early February, the girls would brave the cold weather wearing really low- cut necklines with their saris. Carrying any stole was just so “elderly” (“behanjiana” in vernacular)

Mom had collected those shells when she was a toddler! 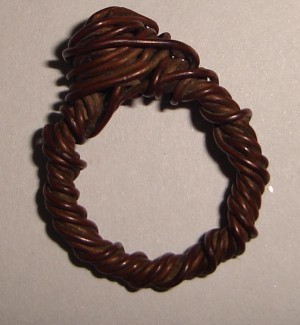 That ring is perfect for my heart finger. I have worn it now.

All I have are the things that she has left behind.

Quite hauntingly they barge upon my state of being making me feel lonesome. There is this void that no boy- friend or husband or a darned spouse can fill! She was a collector of stuff. It seems she has passed all her traits to me while holding my hand while she was breathing her last.

Did she leave all that she has for me to see them and read my years spent with her? My maid had been looking at my face all through the while I had been sorting them. I couldn’t emote with her around. Now that she isn’t around, my tears have found a way to flow down my cheeks. No amount of drinks or chats with my friends could distract me. This is precisely why I am more attached and joined to things instead of people- cause I don’t have anyone around.

And why not? It’s mom who has left it all for me and also instilling a similar habit in me. I am only living up the tradition.

2 Responses to Buttoning up the bygone memories