The 13th Zodiac- Ophiuchus- I

This is what I found when I googled the term. This is the generic definition published across all such sites giving information about the same.

According to astrological principles, the Sun travels from the constellation Scorpius and goes directly into the sign of Sagittarius. But due to the constant motion of the cosmos, the Sun enters, for a few days of the year, the star constellation ‘Ophiuchus‘ before entering Sagittarius from Scorpius, thus creating astrologically the birth of a 13th sign of the Zodiac, which is named as Ophiuchus- the Serpent Holder.

The constellation of Ophiuchus is the only sign of the Zodiac which is linked to a real man. This man lived in ancient Egypt around the 27th century BC, and his name was Imhotep. The attributes of Imhotep can also be found in the Biblical Hebrew man Joseph, son of Jacob. Imhotep is credited with many accomplishments including the knowledge and use of medicine. It is said of Imhotep that he brought the art of healing to mankind. The symbol of a serpent, which is still widely used today to represent the medical profession, was used to represent Imhotep. Imhotep was also known as ‘Aesclepius‘ to the ancient Greeks. 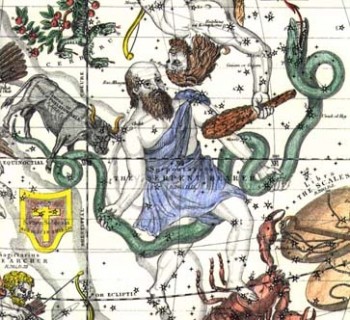 Ophiuchus in the Planetary Zodiac

The New Zodiac as being proposed

Ophiuchus is a large constellation located around the celestial equator. Its name is from the Greek Ὀφιοῦχος “serpent-bearer”, and it is commonly represented as a man grasping the snake that is represented by the constellation Serpens. Ophiuchus was one of the 48 constellations listed by the 2nd-century astronomer Ptolemy, and it remains one of the 88 modern constellations. It was formerly referred to as Serpentarius (English pronunciation: /ˌsɜrpənˈtɛəriəs/; also Anguitenens), a Latin word meaning the same as its current name.

Ophiuchus has sometimes been used in sidereal astrology as a thirteenth sign in addition to the twelve signs of the traditional Zodiac, because the eponymous constellation Ophiuchus (Greek Ὀφιοῦχος “Serpent-bearer”) as defined by the 1930 IAU constellation boundaries, is situated behind the Sun between November 29 and December 17.

The origin of this idea dates back to 1970, with Stephen Schmidt’s suggestion of a 14-sign zodiac (also including Cetus as a sign). A 13-sign zodiac has been suggested by Walter Berg and by Mark Yazaki in 1995, a suggestion that achieved some popularity in Japan (where Ophiuchus is known as snake messenger (へびつかい座 hebitsukai?)).

Mainstream sidereal astrology, notably Hindu astrology, and tropical astrology (including the popular Sun sign astrology, use the traditional 12-sign zodiac based on dividing the ecliptic into 12 equal parts rather than the IAU constellation boundaries, and do not regard Ophiuchus as a sign!

Filed under I, Me, Myself. Follow the link for Continuity, Relevance or Reference.

4 Responses to The 13th Zodiac- Ophiuchus- I