Weather here, in this part of the Gurgaon City is highly unpredictable. 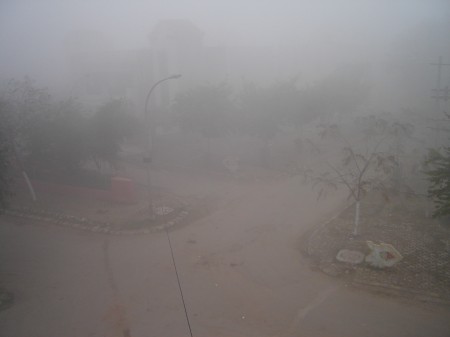 Last year, this winters; it had been foggy only for a day or two in December. I had enjoyed some foggy way drive while driving back from Jaipur to Delhi. Towards the New Year, it would start becoming foggy at 8-ish in the evening and then steer clear by late midnight. I had been practically missing the foggy days adventure. The year I had gotten married, it was stuffed up so bad that we drove back home at 10km/hr speed. All the vehicles were put on a snail trail. The one I was in, was put at the last of the row. Even the day I was to shift from my MN home to my marital house, the visibility had dropped to Zero in no time. This was only a couple of days before my Wedding. I had then traveled from Saket to Rohini. I had started at 10.30pm and reached at 1.10 in midnight!!

Ever since, I didn’t get to enjoy much of fog.

Till I shifted to Gurgaon. Last year it was heavenly. I would go out in the evening for a walk and come back all grinning! Fog would have set on me too. It would remain foggy till as late as 1.30 in the afternoon the next day. My domestic would get a perfect excuse of coming late- “I could barely see nothing..!“ 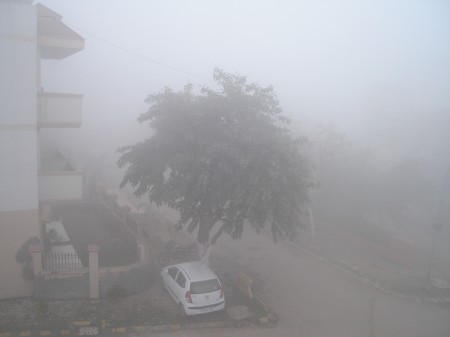 After a couple of you-blink-and-miss hours of misty fog, today happens to be a perfect foggy morning. It had rained a night before in the middle of the night. then yesterday it was cloudy with almost no sun that the particles would dry up. Maybe that brought in some moisture in the weather to condense. Oh yes, that must have been!

A hot cup of coffee that my maid makes for me; today she was on time.. 🙂 Finally, my scoldings have sunken inside her grey cells. I clicked a few pics of the fog outside. I wouldn’t know why the flash didn’t blink. This isn’t my camera and I haven’t done much RnD over the gadget. I am breathing too. I loved how those misty particles caressed my cheeks when I had stepped out in the veranda.

Fog is supposed to be good for skin- isn’t it?